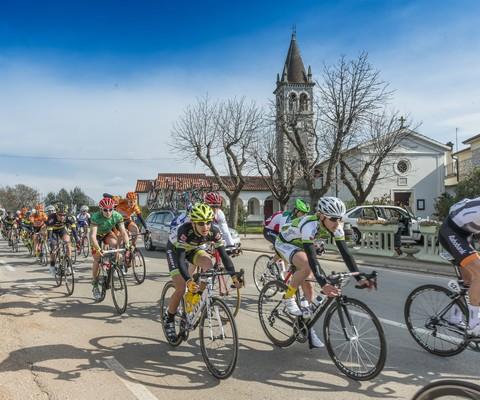 It was once called the Adriatic Highway and connected the northern Adriatic with Dalmatia. Today is called Istarsko Proljeće - Istrian Spring as the entire route passes through Istria.
In the last couple of years the race has consisted of four sections: a prologue and three stages. While the prologue consists of several kilometres in which sprinters come to the fore with the aim of winning the first leaders T-shirt, other stages offer a number of curiosities. Organisers do not want to exclude anyone: on this race both mountain riders and sprinters come out as well as those who like escapes. Over the four days the race goes around Istria, mainly through its interior, although it does not bypass the coast either.

The first stage leads from the Old Town of Labin, across the last 300 metres of 'diced' road to the finish line itself, which is reached after completing the 'undulating' roads of central Istria. The second stage is generally the 'royal stage' that almost always promotes the winner of the whole race.

The winding ascent to Motovun from which a view over the entire Mirna River valley extends makes the difference after which the best one actually wins. The first to pass through the stone gates that lead into the old core of the old Town of Motovun is definitely the fittest rider of the race.

After this, the first stage is ridden to reach the eastern part of Istria, and the second through the heart of the region. The third stage, where sprinters generally win, is reserved for its west coast.
Professional and continental category teams are usually the main participants in the Istrian Spring race among which future champions and winners of stages on the Tour de France, the Giro d'Italia and the Vuelta a España can often be found hiding.